Make Sure to Add the “Female”

This past weekend at UFC 184, “Rowdy” Ronda Rousey shattered the UFC record for quickest finish when she destroyed Cat Zingano with the arm bar at fourteen seconds. At the end of the match, Joe Rogan referred to her as the “most dominant female in combat sports history.” Rousey is now 10-0, remains the UFC Bantam Weight Champion and has wiped out her entire weight class. Rogan asked her who she wants to face next, because she’s Ronda f*cking Rousey and she can pick her own opponents now. Is there anyone else in all of MMA that is as dominant as her? No. So let’s just drop the female part.

Two women’s fights headlined this PPV which is unprecedented considering that UFC President, Dana White, had at one time declared that women would never fight in the octagon arguing that women’s fights weren’t a draw. Judging from tonight, the Most Dominant Female got a pretty good ovation. Pretty, pretty pretttttttty good. 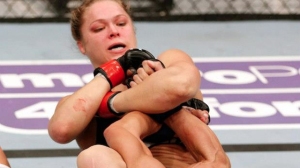 Rousey killing someone with the arm bar.

But why is that? There’s a story there. Rousey is the reason why women exist in UFC and is responsible for the popularity. She’s a complete and total bad ass who has ripped apart every opponent. One of the reasons why I’d been looking forward to this fight is because Zingano, who is now 9-1, was supposed to be the biggest threat to Rousey’s undefeated streak. And Rousey straight up murdered her immediately. And so the question of “Is there anyone that can beat Ronda Rousey?” persists. Drama.

You may have heard in the news that WWE fans have finally thrown their hands up in the air when it comes to the Diva’s division. I gave up a long time ago. Every year or so we get a glimpse of hope that things are going to change. The addition of Kharma in 2010 was supposed to shake things up, but she left abruptly after becoming pregnant. Almost the entire Diva’s roster left over the course of the next two years. They signed Sara del Rey as a trainer to make the current crop of Diva’s better wrestlers, but some women they hired just can’t get on the main roster level. About a year or so ago, WWE stopped exclusively signing models and added some actual female indie performs to their roster. Who knew signing actual wrestlers was a good idea other than literally everyone? (In a perfect world, Rousey would come to WWE and just arm bar everyone to death.)

Over the past year, I’ve almost completely lost interest in WWE. It’s like when the lead singer of your favorite death metal band goes to rehab in Scottsdale, writes an experimental acoustic album and then launches a tour in support of it where they only play that album. Sure, they’re putting out new material, but it sucks, so you don’t listen and over time you slowly drift away and everything else they’ve ever done seems trite.

And that’s WWE. It sucks.

This past week on Raw, The Bella Twins (who are way better wrestlers than when they were signed previously), beat the team of NXT/Indie Darlings Paige and Emma in five seconds. However, unlike Rousey’s victory, no records were set. (Except for longest brow furrow from yours truly.) Wrestling is sports entertainment and, while physical demanding, is scripted. The matches are supposed to tell a story. If done right, they push a story along while showcasing what these athletes are capable of doing in the ring. Now you are invested! These relationships are interesting! This match failed all that. The entrances took far longer the entire match. If you blinked, you missed it.

You also may have missed it because you’re the person that gets up during a Diva’s match to use the bathroom. You have been conditioned over the years to take that time for yourself. I get it, Raw is long. You need your me time. You don’t want to watch a bunch of botched moves, unnecessary and awkward lesbian story lines (that are supposed to play out IRL on Total Divas) ) and all the “Girl Byes” Cameron can throw in your direction. It’s not entertaining – it’s sad. And it’s sad because they are capable of so much more and they don’t get the chance to show that. Like, honestly, why even hire, train and put these women out there if they’re going to do absolutely nothing for your product? What a terrible investment.

(If I may break away for a moment to discuss how asinine “Total Divas” is, please. We’re expected to believe that it is a reality show, but it’s apparent it’s so overly scripted. Matches are lined up on Raw and Smackdown with absolutely no back story only for us to discover, months later, that it was part of a storyline on the show. TD is ruining any shot the Divas have of making a division worth a damn. None of it makes sense.)

The longest reigning Diva’s Champion, AJ Lee, weighed in on this issue on twitter in support of the Divas. They’re underpaid compared to the male talent, except for the NXT Divas who make more money so they can keep up the high standard of beauty WWE requires. AJ herself is the victim of nightly misogyny. Any time she enters the ring, the fans cheer for retired pro-wrestler CM Punk, who just happens to be her husband. The hashtag #GiveDivasAChance began circulating on twitter and even drew the attention of the WWE brass. I’m not optimistic.

No one wants to root for the Diva’s more than me. I wish they would drop that tramp stamp title belt and revert back to the Women’s Championship. You know, the title with some prestige and history dating back past 2006. And it’s our fault for letting it go on this long and not fighting for something we love to be better. When Brie Bella is telling fans that she wishes she was back in developmental because there’s more opportunities for her to wrestle, make your product better. Brie hasn’t been in developmental since 2005. SHE WANTS TO REGRESS. WAKE UP!

In the early oughts, this was tattooed on everyones lower back.

She’s right though. WWE’s developmental system, NXT, showcases the best and the brightest of the future of the company. This past NXT special pitted NXT Women’s Champion Charlotte against Sasha Banks, Becky Lynch and Bayley. Banks, from Boston, honed her craft on scholarship at the prestigious Chaotic Wrestling school. Lynch is a submission specialist from Ireland while Bayley was a staple of the West Coast indies. Charlotte was the only one without previous experience, but she is the daughter of Ric Flair.

Unlike the main roster Divas, whose relationships with other women are “You’re ugly LOL” and “That’s MY boyfriend SMDH,” this match was founded on four women who have developed legit beef with each other over wanting to be the best. Charlotte boasts herself as “genetically superior” to the rest. Banks and Lynch’s “Team Bae” duo broke up the week before the match because neither wanted the other to outshine her. And Bayley, the complete underdog in every way, has earned the respect of most of her competitors for not backing down and was fired up to prove she deserved to be on the same level. They put on an incredible match which would’ve been a great match regardless of gender. And when it was over, everyone’s story line moved forward. NXT is the best. And Raw/Smackdown/Main Event can do the same thing! They have to give us a reason to care.

Who do you want your daughters looking up to? Girls who say “To be the best, you’ve got to beat the best” or the shallow, self involved, vindictive for no reason characters that WWE has created for their weekly television tapings only for the announce team to spend the 35 seconds their matches go on for talking about John Cena’s latest whatever no one cares?

You should say Ronda Rousey. And hopefully some day soon you will say Sasha Banks.

When my alarm goes off on my phone every morning, I abruptly turn it off, look at my email and then check twitter. For some weird reason my thumb hit on the “Discover” button and I saw something I never thought I would see. Sara del Rey was the number one trending topic on twitter. My first honest thought was that she had died. Awful, I know. What is even more awful is that I considered that to be the case over what had actually happened: She has signed a WWE contract.

This is a huge deal for a number of reasons. Sara Del Rey, born Sara Amato, has spent the last ten years on the independent scene working on her craft in promotions like Ring of Honor, Shimmer, and Chikara. Wrestling didn’t come naturally to her. It was something she worked incredibly hard to be successful at, and something that ten years later, she was still pursuing at the same rate. Is it possible to be proud of someone that you don’t even know?

Anyone that watches WWE knows that the Diva’s Division, which is their annoying name for the Women’s Division, is hilariously flawed. There’s an unbalanced mixed of former models who can’t run the ropes (Kelly Kelly, Alicia Fox, Rosa Mendes) and actual women who can wrestle (Beth Phoenix, Natalya, AJ, Tamina). Last year, they signed former TNA Knockout’s Champion Awesome Kong, now known as Kharma, but they also lost tremendously talented ladies (Mickie James, Melina, Maryse, Gail Kim, Maxine) that have been forced to find homes at Impact Wrestling and back in the Indies. Oh, and yes, only four of them women currently in the division are 30 or over. And only two of those women debuted over the age of 30. At age 31, del Rey is the first woman to be signed over 30. This is another reason why her signing is so shocking. By WWE standards, she is way too old.

My second thought after “OMG SARA DEL REY” was “They’re going to fuck this up.” WWE creative has been struggling with story lines for all of their talent lately. They gave one of their strongest in ring performers, Natalya, a horrific farting gimmick. Beth Phoenix was Diva’s Champion for six months, but was barely seen on television and eventually lost the title  to one of the Bella Twins after faking an ankle injury. Yes, they had to have one of their strongest performers fake an injury to get pinned and lose the title, because it was not believable any other way.

I’ve been fortunate enough to see del Rey wrestle at two Chikara shows over the last year. Thankfully, she will be returning to Boston with the promotion later this month so I will have one more chance to see her before she relocates to Tampa and begins her training. Hopefully, I will not be a giant social leper this time and will actually bring her some gum and tell her how inspiring and awesome I think she is without sounding like a total lunatic. Any help with this is greatly appreciated.

So, what happens when your favorite indie wrestler signs a WWE contract? You wear their shirt all day despite how wrinkled and covered with cat hair it is. And you celebrate it. You celebrate the shit out of it, because you’re almost 30 yourself and you realize that you can still work hard to achieve your goals and be rewarded no matter how outlandish and ridiculous they may seem. 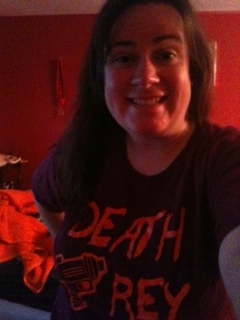