[Insert “Do You Smell What The Rock is Cookin’?” joke] Pancakes! The Rock is cookin’ pancakes, you guys! Now, I have a problem. First off, these pancakes are fine. They’re just pancakes and what I presume is a normal pancake recipe so just make those if you want to make The Rock’s FAMOUS Rock-Bottom Pancakes. In fact, don’t even bother to change your recipe, it’s fine.

The problem is that there are two recipes in here from my husband, The Rock, and neither of them are for a pie. The Rock loves pie so who better than The Rock to submit a recipe to this stupid cookbook. I want to know what type of pie is The Rock’s favorite pie and I want to make that pie for The Rock.

Honestly, these were tasty and a little sweet. Nothing like the stack of twelve pancakes that The Rock consumes on his epic cheat days in addition to the pizzas and pans of brownies. Do you think that you could hang with The Rock? Sure, hanging with The Rock on his cheat day sounds rad, but could you survive his regular diet? (Spoiler alert: It involves tons of cod.) In order to sustain this muscle mass and justify the cod consumption you’ll have to be able lift weight so heavy you’ll probably shit yourself. 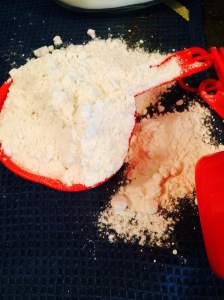 This was the first time in my life I made normal pancakes. I’ve cooked kodiak cakes and those weird paleo ones that are just a banana and an egg. They’re delicious, but are they famous? This was also the first time I didn’t set off my smoke alarm by cooking pancakes. Success!

However, I did manage to spill a massive amount of flour on a towel on my counter which is way more fun than just the counter. The same thing happened when I made that artichoke chicken a few weeks back. I need a Flour Handler.

This was one of two recipes from the cookbook I prepared today for my book club brunch. Thankfully, the group embraced the fact that these were related to wrestling and were probably delighted that they tasted like normal pancakes. Success!

I’m going to give the recipe a skeptical pass because I feel like they could’ve really gone places with this recipe, but I didn’t burn my house down so it I consider it a great accomplishment!

Enjoy these with literally anything that The Rock has ever done in his life.

They went so fast!

This cookbook is now has a record of 3-1.